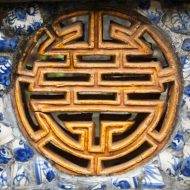 On the frontispiece of The Quiet American Graham Greene quotes another well-traveled skeptic, Lord Byron: ‘This is the patent age of new inventions/ For killing bodies, and for saving souls,/ All propagated with the best intentions.’

In novels, screenplays and short stories, Greene chronicled the end of empire. Scorning those who stood in history’s way, he did not spare heroes, patriots or the naïve. ’God save us always from the innocent and the good,’ Fowler, the jaded correspondent who narrates The Quiet American, says to the French inspector, Vigot. After critics called Greene anti-American, Hollywood distorted The Quiet American in 1958 with a heroically happy ending. After the Sept. 11 attacks, Miramax postponed the second film version until Sir Michael Caine, who portrays Fowler, became persuasively unquiet. (It opened last November.)

The book endures, having served as a journalistic guidebook, a prophecy and even a tourist icon.

Banned in Vietnam in the 1950’s, The Quiet American is now sold at kiosks in Ho Chi Minh City as a symbol of local color, like Moby Dick on Nantucket or Cannery Row in Monterey. The book heavily influenced correspondents who covered the American war in the 1960’s. ‘Many passages some of us can quote to this day,’ said David Halberstam, who received a Pulitzer Prize in international reporting while a correspondent for The New York Times in 1964. ‘It was our bible.’ Graham Greene, right, with French soldiers in 1951 during a trip to Indochina, the setting for The Quiet American.

Fowler, following a besieged French patrol, outlines a modus operandi for intrepid reporters: ‘No journalists were allowed, no cables could be sent, for the papers must carry only victories. The authorities would have stopped me in Hanoi if they had known of my purpose, but the farther you get from headquarters, the looser becomes the control, until, when you come within range of the enemy’s fire, you are a welcome guest.’

By the 1960’s, the book had become ‘the equivalent of what Napoleon suggested: a marshal’s baton in every corporal’s knapsack,’ recalls David Greenway, who covered the Vietnam War for Time and The Washington Post. ‘Every reporter had one. Many carried The Quiet American and Scoop by Evelyn Waugh.’

The British press bracketed Greene and Waugh as ‘Catholic novelists’ because both wrote morality-play novels, but while Waugh celebrated military exploits, Greene, who served in British intelligence during World War II, did not. In 1956, American critics failed to salute The Quiet American when it was published in the United States.

‘His caricatures of American types are often as crude and trite as those of Jean-Paul Sartre,’ wrote Robert Gorham Davis in The New York Times. In The New Yorker, A. J. Liebling called the book a ‘nasty little plastic bomb.’

In 1952, the year Greene writes about, some 300 Americans were in Vietnam. Fowler mocks policies that would later send hundreds of thousands of G.I.’s into the jungles and protesters onto American streets. ‘If Indochina goes … ’ argues the American, an undercover government agent named Alden Pyle.

Fowler interrupts him: ‘I know that record. Siam goes. Malaya goes. Indonesia goes. What does ‘go’ mean? If I believed in your God and another life, I’d bet my future harp against your golden crown that in 500 years there may be no New York or London, but they’ll be growing paddy in these fields, they’ll be carrying their produce to market on long poles, wearing their pointed hats.’

Fowler and Pyle, the quiet American of the title, compete for the attentions of Phuong, a young Vietnamese woman. Love and war in an exotic locale is a cinematic staple, but in Greene’s novels and screenplays the dominant triangle is God, guilt and Greene. Like Casablanca (1942) in World War II, The Third Man (1949), written by Greene, blends love and danger, but is set in cold war Vienna. Even an early Indochina movie, Red Dust (1932), finds Clark Gable running a rubber plantation while in a romantic triangle with Mary Astor and Jean Harlow.

Today, some filmgoers would argue that Michael Caine was born for the role of Fowler; others that he was born 20 years too soon. The power of his performance is in his face, a road map of the paths to glory he followed in earlier roles: his stand as Lieutenant Bromhead with Stanley Baker in Zulu (1962), and, as Peachy Carnehan, his trek to Kafiristan with Sean Connery’s Danny Dravot in The Man Who Would Be King (1975). With no more dominion over palm and pine, Sir Michael’s performance in this film is ripe with an antiheroic vulnerability imposed by age and dissolution, often punctuated with Lear-like rage. As Phuong tells Fowler, he is ‘not so old, not so fragile.’ Brendan Fraser’s Pyle is a study in cagy befuddlement. In 1 scene, he wears a Red Sox cap, a symbol of lethal innocence that had not occurred to Greene.

Greene, who died at 86 in 1991, has been translated onto the screen more than any 20th-century writer. His closest rival is Rudyard Kipling. In the New Biographical Dictionary of Film, David Thomson calls Greene a ‘cinematic novelist’ for ample reason. In The Quiet American, for example, the plot unfolds in flashback. A film critic in the 1930’s (when he admired the Shakespearean lunacy of the Marx Brothers), Greene did not follow Faulkner and Fitzgerald to California poolsides.

‘Long Hollywood contracts — sheet after closely printed sheet as long as the first treatment of the novel which is for sale — ensure you have no ‘author’s rights,’ ‘he wrote in 1958.’ You rake the money, you go on writing for another year or 2, you have no just ground for complaint. And the smile in the long run will be on your face. For the book has the longer life.

The most extreme changes I have seen in any book of mine were in The Quiet American; one could almost believe that the film was made deliberately to attack the book and the author… I am vain enough to believe that the book will survive a few years longer than Mr. Mankiewicz’s incoherent picture.’

Joseph L. Mankiewicz, who directed and wrote the screenplay for the 1958 movie of the novel, later called it ‘the very bad film I made during a very unhappy time in my life.’ But Jean-Luc Godard called it the best movie of 1958. (That year’s Oscar went to Gigi.) Mankiewicz wanted Laurence Olivier to play Fowler and Montgomery Clift to play Pyle, but ended up with Michael Redgrave and Audie Murphy, a World War II hero. Claude Dauphin, the French actor, swipes scenes as Vigot. Bruce Cabot, in films a second banana to King Kong and John Wayne, sparkles as the bumptious and boozy American reporter, Granger.

The current version is not anti-American, Sir Michael insists, but ‘anti the 300 to 400 people who started America’s entry into the Vietnam War.’ Sir Michael describes himself as ‘the most pro-American foreigner there is.’ The same could not be said for Fowler who, in the book, recalls explaining to Vigot the sarcastic title used to describe Pyle: ‘He’s a good chap in his way. Serious. Not one of those noisy bastards at the Continental,’ he remembers saying, mentioning the hotel where the United States correspondents gathered. ‘ ‘A quiet American.’ I summed him precisely up as I might have said, ‘a blue lizard,’ ‘a white elephant.’’

Greene’s characters, in their staggering search for redemption, often stockpile sin. While Fowler wallows in opium, booze and brothels, he is uninterested in nationalism, imperialism or Communism. For Greene, God and guilt always trump politics and its affectations.

‘Be disloyal,’ a troll-like guru rants at a boy in Under the Garden, an autobiographical Greene short story of 1963. ‘It’s your duty to the human race. The human race needs to survive and it’s the loyal man who dies first from anxiety or a bullet or overwork. If you have to earn a living, boy, and the price they make you pay is loyalty, be a double agent — and never let either of the two sides know your real name. The same applies to women and God. They both respect a man they don’t own, and they’ll go on raising the price they are willing to offer. Didn’t Christ say that very thing? Was the prodigal son loyal or the lost shilling or the strayed sheep?’

Fowler tells Pyle, ‘I wish sometimes you had a few bad motives, you might understand a little more about human beings.’ Greene occasionally wandered toward good intentions himself. In 1953, he told Waugh that he wanted to ‘write about politics and not always about God.’ Waugh waspishly replied: ‘I wouldn’t give up writing about God at this stage if I was you. It would be like P. G. Wodehouse dropping Jeeves halfway through the Wooster series.’ – New York Times [30.01.03]